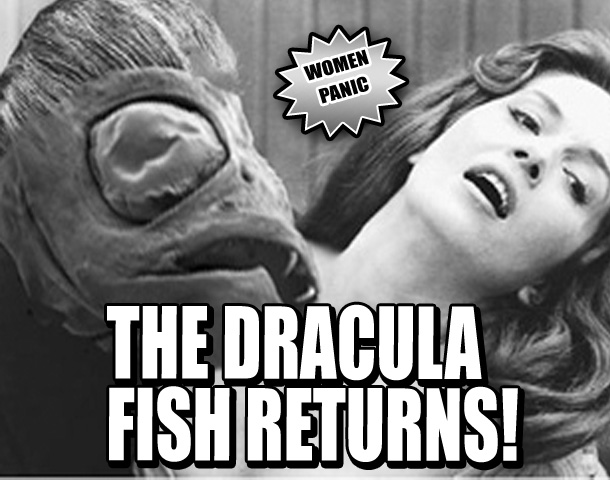 LONDON – The Dracula Fish, who once attacked women in Eastern Europe, has returned!

Detectives reported last night that the Dracula Fish,  who hasn’t been seen anywhere in the world in over fifty years, has been attacking women in the Hyde Park area of London.

The Dracula Fish is a vampire fish:  that is half-human, half-fish.   He is a translucent fish that can exist outside water only at night.  The Dracula Fish first appeared in Romania in the early 1950s, but has not been seen since.  The photographs in this article are from the 1950s.

“We have several dozen women that have been bitten in Hyde Park. They all describe the perpetrator the same way – a man with a fish head, a hot male body, and who bites and sucks their blood,” said Detective Ian Frax of Scotland Yard.”

“We’ve been working on the case for about a year now.  We wanted to make sure that the Dracula Fish did in fact exist and now we have proof.  We’ve analyzed the bite marks and saliva found on the victims and matched the DNA to evidence found in the attacks in Romania in the 1950s,” said Flax. ” It is our duty to alert Londoners that the Dracula Fish is back and women must be alert.”

The Dracula Fish is six feet tall, weighs 180 pounds.  His head is large – about 15 inches high and about 24 inches around. The fish head looks harmless and sweet when its mouth is closed, but it has fangs on both the top and bottom of its jaw.  The teeth are very sharp.

The Dracula Fish comes into London at night and then takes a train back to the sea for the morning.  He sleeps in a coffin at the bottom of the sea.  Here’s a close-up picture of the Dracula Fish in its coffin in 1955. And here is a picture that was taken by the Navy scuba-divers last week:

Women are advised to stay far away from the Dracula Fish.  “The danger is that the Dracula Fish is quite charming.  Even though he has a fish head, women seemed to be drawn to him,” said Frax.

“That’s the danger,” said Frax.  “Women fall for his charm and then are bitten.  It’s very dangerous.”

Women who are bitten do NOT turn into a vampire or a fish.  They just suffer from headaches and depression for several months.  “He puts a spell on them.  Often after they are bitten, they go back to Hyde Park looking for him.”‘

Women, please, if you see the Dracula Fish, do not approach… there are other fish in the sea.

29 thoughts on “THE DRACULA FISH RETURNS!”