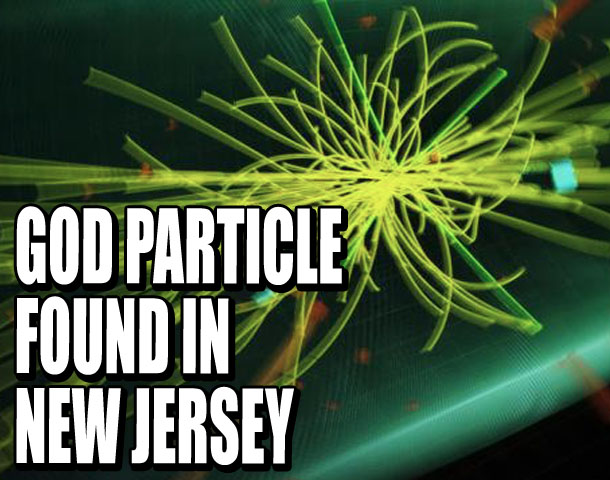 CAMDEN — Physicists confirmed that they have found the source of our universe – and it’s in New Jersey!

Physicists made a major scientific discovery – proving that the “God particle” actually exists and vindicating the equations that have been used since Einstein first presented his Special Theory of Relativity. Physicists have been trying to find the “God particle” (the Higgs boson) for over forty years, so it’s no real surprise that they finally did it.  But what IS a surprise is it was  found it in an abandoned bank depository in Camden, New Jersey. And it was found by singer-actress, Taylor  Momsen.

How can that be?

Well, physicists has a reputation for being extremely complicated, but sometimes the simplest questions that lead to truly profound and obvious insights. When Einstein asked himself, “What would happen if you could ride on a beam of light?” for example, the answer led him to the Special Theory of Relativity.  He concluded that the speed of light was constant.

Taylor Momsen was touring with her band The Pretty Reckless and they stopped on the side of the road so some of the band members could relieve themselves.  One of the band members, the drummer Jonathan Burger, was the nephew of  physicist Alfred Gordowksi  of the Brookhaven National Laboratory in Upton, New York.  Gordowski with the ATLAS experiment, one of two independent teams that had been looking for the Higgs boson at CERN, the European Organization for Nuclear Research near Geneva.

Here’s the building where the God particle was found: Taylor went into the building to get warm and saw something “strange” glowing in the corner.   The drummer called his uncle, who came right away with his team.  They studied the “glow” for the last six months and made the major announcement yesterday – “we have found the God particle!”

And here’s Taylor Momsen shortly before she found the God particle: Gordowski was joined in Camden by other prominent physicists from around as they announced Tuesday  they found definitive proof of the particle that is believed to be a basic component of the universe.

“Of course the universe began in New Jersey,” said Governor Chris Christie.  “Everyone who lives here has known it all their lives.   That’s why so many want to live here.  They may not know it, but they are drawn to the universal source.   It’s official now – New Jersey is the center of the universe.”

Some physicists speculate that Albert Einstein moved to New Jersey (he was a professor at Princeton) because he had an idea that the God particle was in New Jersey.  “He just was in the wrong city,” said Christie.  “Camden is where it all began.”