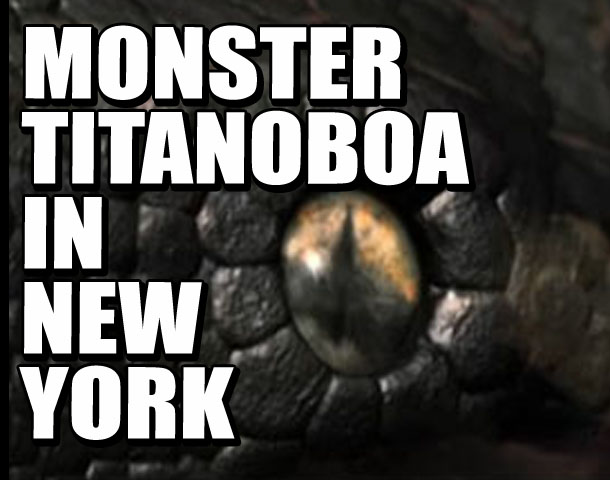 A monstrous sight: a 48-foot-long, 2,500-pound titanoboa snake is headed for Grand Central!

The good news: It’s not alive. Anymore. But the full-scale replica of the reptile — which will make its first appearance at the commuter hub on March 22 — is intended, as Smithsonan spokesperson Randall Kremer happily admitted, to “scare the daylights out of people” — actually has a higher calling: to “communicate science to a lot of people.” The scientifically scary-accurate model will go a long way toward that: If this snake slithered by you, it would be waist-high and measure the length of a school bus. Think of it as the T-Rex of snakes. This newly discovered species, known as titanoboa  (yes, the words “titan” and “boa” are in there), which lived 65 million years ago, is about to have its close-up. The New York City appearance is promoting an exhibit at the Smithsonian Institute’s National Museum of Natural History in D.C. opening on March 30, which ties in to a TV special on the Smithsonian Channel called, what else,  “Titanoboa:  Monster Snake.”   The two-hour program airs April 1. Remains of the titanoboa were first discovered in a Colombian coal mine in 2005. One of the researchers specializing in the  Palocene era, the time after the death of the dinosaurs, was Jonathan Bloch. A vertebrate paleontologist from University of Florida’s Museum of Natural History, the scientist led multiple expeditions, along with Carlos Jaramillo of the Smithsonian Tropical Research Institute. The team collected remains from the mine, which resulted in the find. Together with ancient-snake expert Jason Head of the University of Nebraska, they named the world’s largest snake Titanoboa. Speaking on the phone to Yahoo! News, Bloch admitted that when the team was first collecting the skeletons of Titanoboa, he didn’t immediately understand what he had found until he returned to the lab. With the help of his students, he was able to identify the fossils as snakes, just much, much bigger than the ones of today. He described the enormous vertebrae as “sort of like if you saw a mouse skull the size of rhino skull.”

The predator, which is related to a boa constrictor but actually behaved like an anaconda, lived in water and fed on fish, other titanoboas, and crocodiles (very, very large crocodiles).

If this sounds like Hollywood’s next blockbuster, Bloch noted that this time around, truth is actually bigger than fiction: The predator from the movie ” Anaconda,” for one, is not as big as titanoboa. “This is really an example where reality and the past have exceeded the imaginations of Hollywood.”