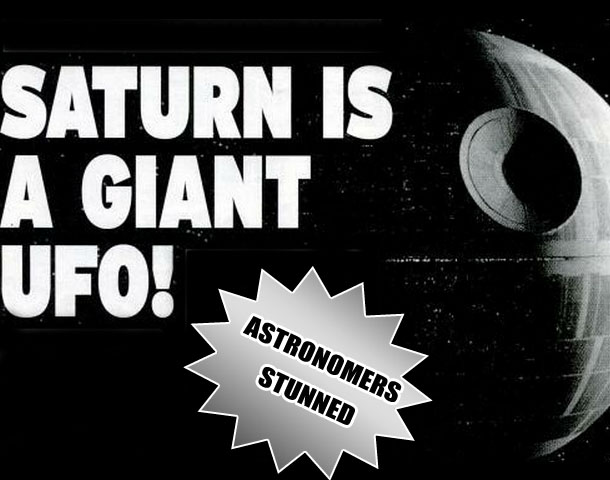 [mpoverlay]Forget about the scientific “facts” drummed into your head by school teachers.  Saturn is not a planet – it’s a colossal UFO!

That’s the assertion of controversial astronomer Dr. Eduardo Marquez, who has come forward with puzzling photos that appear to bolster the seemingly outlandish claim.

“new high-definition photos taken by the powerful 2.6-meter telepscope at our observatory show windows, cargo bays ane even shuttle-craft-size saucers going  to and from the mammoth vehicle,” says Dr. Marquez, who captured the images with the Nordic Optical Telescope in the Canary Islands.

“Clearly this is not a natural body, but the creation of intelligent beings – an almost inconceivably huge flying saucer 74,900 miles in diameter.”

Shockingly, Dr. Marquez claims that NASA has known the truth for decades and is deliberately concealing it from the world. When Pioneer 11 flew by Saturn on Sept. 1, 1979 and when Voyager 2 photographed it from just 21 million miles away in 1981, they couldn’t have missed these telltale features, He says.

“I believe NASA doctored those photos – and all since, including images taken by the Hubble Space Telescope – fearing that to inform the public that a spaceship larger than EArth is orbiting our sun would spark international panic.”

But terror is unwarranted, the scientist insists.

“Clearly, whoever built a craft that immense has the capacity to conquer Earth and could have done so any time in the past several thousand years,” Dr. Marquez says. “Since they haven’t done so, we can presume their intentions are not hostile.”

Saturn unique rings have long distinguished it from  the other eight planets in the solar system.  To this day scientists aren’t certain about their composition and origin.  Prevailing theory is that they are made up largely of ice and were formed from moons shattered by impacts of comets and meteors. “It always troubled me that the “rings” looked solid – in fact, it occurred to me last year, they look like he wing of a flying saucer,” he reveals.

“Training the telescope on Saturn under ideal conditions. I recently found that to be precisely the case.”

The scientist believes that Saturn is a “mother ship” from a farflung  star system, used as a base of operations for aliens who’ve been studying mankind for centuries.  He notes that a 1988 study showed that in 94 percent of saucer sightings, the trajectory of the craft indicated they were heading to or from Saturn.

“I believe all flying saucers encountered in our atmosphere come from the mother ship.” Dr. Marquez says.

The humongous craft probably  has at least 5,000 decks and could accommodate “literally billions” of extraterrestrials.

“They have no need to conquer Earth – they doubtless have all the comforts of home in their planet-size spacecraft,” the expert says. NASA officials deny doctoring any images and reject the astronomer’s accusation of a coverup. They call the egghead’s theory about Saturn “preposterous.”

“We know that this is a respected scientist, but it sounds like his trolley has jumped its tracks,” says a space agency spokesman.

– -If the diameter of Earth were 10 percent smaller or larger, all the life on the planet would either be frozen or burned up.

– If the fresh water of EArth (only 1.6 percent of the water on the planet) were divided equally among all the people on the planet, each one would get 40 million gallons.

— Uranus is the only planet that rotates on its side.

— The Venus day is longer than the Venus year. The planet spins on its axis once every 243 EArth days and orbits the sun once every 224 Earth days.

— Venus is much brighter than any other planet or star.  At its brightest, it can cast shadow and can even be seen during the daytime.[/mpoverlay]