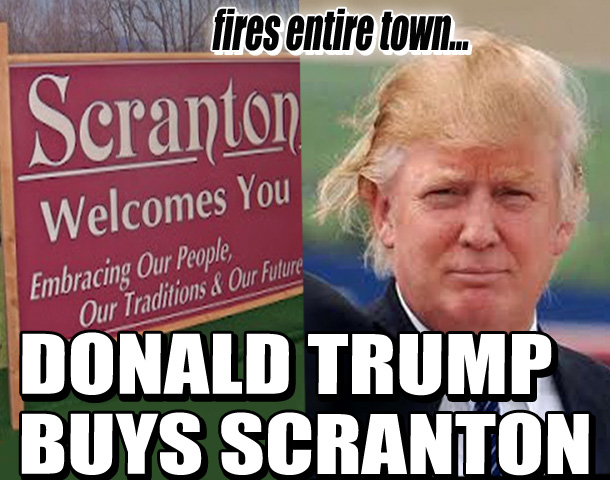 Firefighters, police and other public workers in a Pennsylvania city saw their wages slashed to minimum wage rates on Friday, in a move by the cash-strapped city to balance its budget. The town was reeling, so…

“I always wanted a town in Pennsylvania to play with,” Trump reportedly said.  “It’s a dumpy town, but I’m going to make it into gold, like I do everything.” And a new police chief: Trump wants to turn the town into one big casino with “lots of strip clubs.”

Arsenio Hall will be on hand next week, when Donald Trump signs the final documents for the sale.

City leaders in the state’s capital of Harrisburg, meanwhile, were prepared to seek bankruptcy protection but were thwarted last week by state legislators who extended a bankruptcy filing ban until Nov. 30.

“if the price is right, he can have it,” said a top elected official.  “Maybe he can do something with it.”

Trump loves the grittiness of the city: And feels that there’s lots of potential. “Scranton will become the Hollywood of Pennsylvania.  Bank on it.”