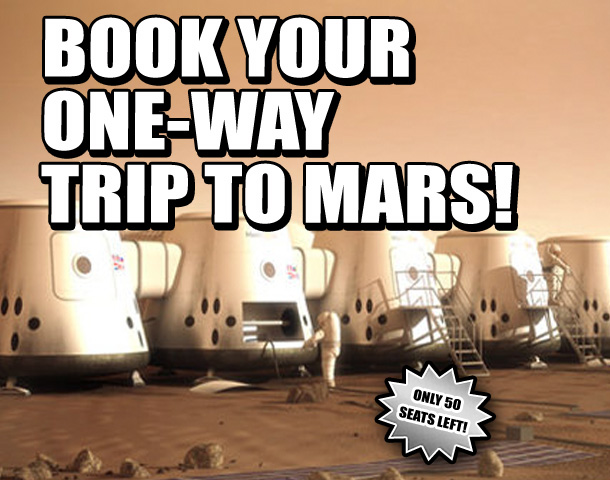 Thousands are lining up for a one-way trip to Mars!  Book your flight now!

A Dutch company is establishing a human colony on Mars.  The non-profit organization, Mars One, will send a crew to the Red Planet in 2019 – and because there will be major changes in the human body after a stay on Mars, there’d be no coming back.  You have to say goodbye to Earth. That’s what has many across the world so excited.  “I’m sick of this planet,” said Janet Ross of Sante Fe.  I want a new planet.  Mars fits me perfectly.”

78,000 people have applied to become one of Mars’ first immigrants (the company is expecting 5,00,000 applicants). “This is turning out to be the most desired job in history,” said Bas Lansdorp, co-founder of Mars One.

Day-to-day life on Mars will be no picnic: The organization says that the daily routine would involve construction work on the colony (installing greenhouses, for example), maintenance of the settlement’s systems and research into Mars’ climate and geological history–all in an inhospitable environment with unbreathable air and an  average temperature in the planet’s mid-latitudes of around -58 degrees Farenheit. But Mars One says it is not looking for applicants with specific skills, such as a science degree, that might be useful during an interplanetary posting. Instead, they are looking for people who “have a deep sense of purpose, willingness to build and maintain healthy relationships, the capacity for self-reflection and ability to trust.” They also want volunteers who are “resilient, adaptable, curious, creative and resourceful.” Candidates will receive a minimum of eight years training before leaving Earth, the company says.

Candidates hailing from over 120 countries (although the vast majority are from the U.S.) uploaded a video to Mars One’s website explaining why they’re suitable for the mission.

People are still lining up outside their offices: In addition to people skills, successful applicants must be good fundraisers too: Mars One plans to raise much of the mission’s $6 billion estimated cost through a reality TV show following the applicants as they undergo preparations for the one-way trip to Mars. 16 thoughts on “BOOK YOUR ONE-WAY TRIP TO MARS!”